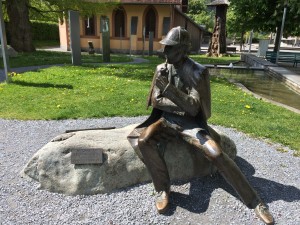 Statue of Sherlock Holmes in Meiringen

Of course, Sherlock isn’t dead! Conan Doyle was forced to ‘resurrect’ him in ‘The Adventure of the Empty House’ when it became clear that the public were not happy doing without their hero. I’m sure you know the story. Holmes comes again to Watson after three years’ absence in the Spring of 1894 and the tough ex-military doctor faints with the shock. When he recovers, he exclaims, “‘Holmes!… Is it really you? Can it indeed be that you are alive? Is it possible that you succeeded in climbing out of that awful abyss?’” He even grips Holmes’ arm to check that he is not a spirit. It is described almost like one of the resurrection appearances of Christ. Holmes then explains all about how he escaped Moriarty at the Reichenbach Fall. And as well as a joyful reunion, Holmes and Watson are now also able to solve the case of the murder of the Honourable Ronald Adair and capture the crack shot who has been stalking Sherlock. Watson is thrilled to be with his great friend again and be in an adventure: “it was indeed like old times.” 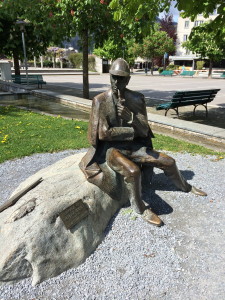 In Meiringen, as I found on my trip this week, it is impossible to avoid the influence and ‘presence’ of Conan Doyle’s creation. There is a wonderful life-size brass statue in the centre of the town 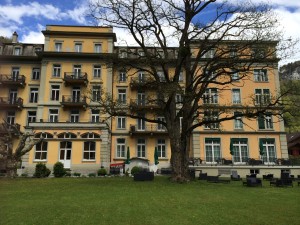 The back of the Park Hotel du Sauvage

outside the hotel where Conan Doyle (and Holmes and Watson) stayed,

there are pubs named after Sherlock, 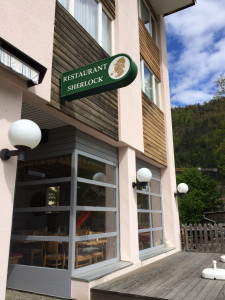 and a Sherlock Holmes Hotel and restaurant, where we had a coffee and a fantastic view 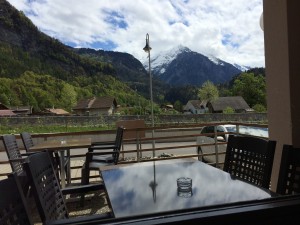 View from the Sherlock Holmes Hotel

of one of the many mountains surrounding Meiringen in brilliant sunshine. 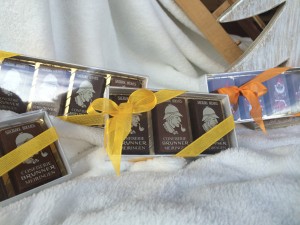 There were Sherlock chocolates in the town’s many sweet and cake shops (although no Sherlock-themed meringues that I saw, even though Meiringen is supposed to be where meringues originate). 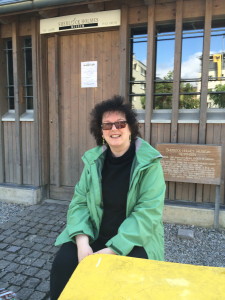 Sitting outside the Sherlock Holmes Museum

The main joy was the wonderful Sherlock Homes Museum, with a much better than expected range of artifacts and displays, including police uniforms from both the London and the Meiringen police forces of the 1890s. 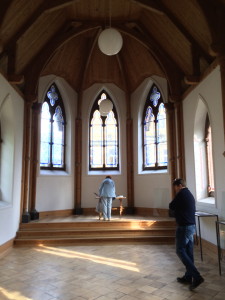 The interior of the English Church

Sadly it is in what was the English Church, now unused as such, although one can still enjoy it as a piece of neo-gothic architecture from 1891.

A large part of the joyful atmosphere created at the Museum is due to the wonderful Marlyse Dettmar who has been looking after the collection for around 15 years and is now in her eighties, I believe, and is full of a bubbling enthusiasm and kindness, as well as speaking perfect English, of course. 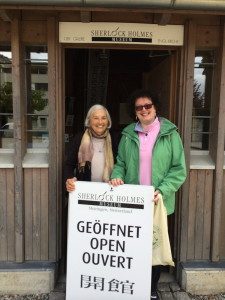 1st May Opening Day at the Sherlock Holmes Museum

She and her team are volunteers and were so kind as to open up the museum especially for our group on our arrival, so we could visit it on the same day as seeing the Reichenbach Falls. We were also there for the official 1st of May opening day of the season.

In the original story, Mrs Hudson the landlady understandably had “violent hysterics” at the re-appearance of Holmes. And Sherlock found that his brother Mycroft “had preserved my rooms and my papers exactly as they had always been.”

Reconstruction of the living room of Sherlock Holmes

I was extremely impressed with the re-creation of Holmes’ living room at 221B Baker Street in the basement of the museum. It did seem astoundingly authentic and is based on every detail from the Conan Doyle stories that could be culled. It felt to me as if Holmes and Watson had just stepped out for a moment, with the violin and newspapers left lying around and the fire burning, the lamps lit, and the intriguing corners full of Holmes’ experiments and notebooks. When watching the Jeremy Brett TV series, I had never felt that the living room was really Sherlock’s – I kept thinking “I’m sure he wouldn’t have chosen those curtains – was it Mrs Hudson’s taste?’ etc. But in this museum’s re-creation everything felt right straightaway: “the old landmarks were all in their place.”

Later in the week, I noticed that the feet of the main statue of Sherlock in the town were shining in the rain, the brass looking like the foot of the statue of St Peter in the Vatican that is touched and kissed by pilgrims. Is this how Sherlock’s feet have been worn to a shine??!! Hopefully the fans’ devotion is not that extreme!

But the main surprise came on the first night. At dinner some of our fellow guests at the hotel began to peer out of one of the windows in the corner of the room as it got dark. When asked why, it turned out that there was an image of Sherlock Holmes being beamed onto the side of the mountain near the Reichenbach Falls. I could hardly believe my eyes – it was like a Bat signal over Gotham City! It was a small circular image that changed every minute or so, alternating between two different profiles of Holmes with his trademark deerstalker and pipe. It turns out I could also see this from my room, although my camera failed to capture it properly – it just looks like a pinprick of light in the centre of the picture, although one can see how large it is compared to the lights of the town below. 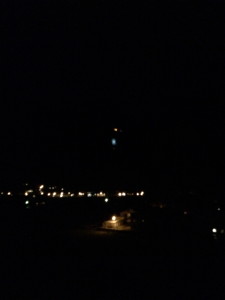 Sherlock image over Meiringen at night (the pinprick of light in the middle!)

It was rather strange, to have that image watching over us, like a beneficent presence.  If any proof were needed that Meiringen had taken Sherlock Holmes to its heart, this was it.  I began to wonder what the town would actually be like without this added literary aspect.  It is certainly a beautiful place and the hotel and food and Swiss trains were fantastic, our guide charming and delightful, and our fellow travellers fascinating and super-friendly, so I think we would have had a marvellous holiday regardless.  But there’s no doubt that Sherlock and his adventures at the Reichenbach Falls do give the town of Meiringen an edge over its competitors it wouldn’t otherwise have, and I am delighted that not just the Swiss but people from all over the world can enjoy what Conan Doyle obviously saw in the dramatic beauty and story potential of this historic place.

But of course Conan Doyle’s short story ends with Holmes and Watson now based back in England again, as am I: “once again Mr Sherlock Holmes is free to devote his life to examining those interesting little problems which the complex life of London so plentifully presents.”

It’s been a privilege to be able to follow in the footsteps of Sherlock Holmes on such a wonderful holiday.  Hopefully there will have been plenty of inspiration for my own future writing of murder mysteries in this great tradition. 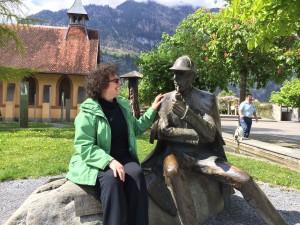 Outside the English Church with Sherlock Homes statue